It could be a page right out of the Korean War novel, War Remains.

Another soldier, Corporal James Rexford Hare, has come home from a forgotten war. And this time, it’s a soldier who was captured during the battle at Hoengseong.

Hare was in the 15th Field Artillery Battalion, 2nd Infantry Division, which was part of the American forces supporting Republic of South Korea forces near the South Korean town of Hoengsong, when Chinese forces launched a massive counter attack, according to a news release from the Defense Prisoner of War/Missing Personnel Office in Washington.

According to the release, “During the attacks, U.S. and Korean forces were forced to retreat south. Over the next few days units of the 2nd ID were attacked again, suffering more than 200 casualties, including more than 100 servicemen being captured by enemy forces.”

Read the rest of the story here.

Thanks to advances in DNA testing, more and more remains are being identified and quicker than in the past. Although there are still more than 7,900 missing Americans from the Korean War, with each set of remains identified and another service member coming home brings hope to those families waiting for their loved one to come home.

Until They Are Home

I first learned about Hoengsong and “Massacre Valley” when I read Stanley Sandler’s Korean War history, No Victors, No Vanquished in 2000, but it wasn’t until May 2001, when I had the chance to sit down with Oscar Cortez, when I learned more about “Massacre Valley” and what happened to elements of the 2nd Infantry Division.

When I started to write my Korean War novel War Remains in the fall of 2009, I remembered that interview I had with Oscar on our way to another Korean War battlefield, Chipyong-ni when he described the battle he was in north of Hoengseong in February 1951. That’s when I knew how my novel would begin and end and one of the battles which would figure prominently in the book. I wanted readers to know about this battle and to remember the men who lost their lives there.

r view of the valley and the monument which was dedicated to the United States Second Infantry Division (which is still stationed in South Korea). That’s another irony of this so-called “forgotten war.” One of the divisions which fought in the war, is still here and ready to fight.

And let’s not forget that there are still over 7,900 American service members from that war still listed as MIAs.

Of course, for the family members still waiting for their loved ones to come from that war, it has never been a forgotten war for them.

Three of my Facebook friends and their families are waiting for their loved ones to come home. One of those friends lost an uncle in this very same battle.

It’s been almost four years since I published this novel about the Korean War. I am proud of it and the lives it has touched. 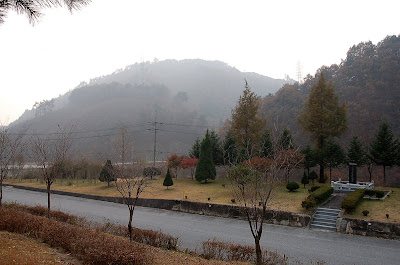 Located in “Massacre Valley” a few miles north of Hoengsong, is the monument for the US Second Infantry Division, which suffered hundreds of casualties here on February 12-13, 1951.

In War Remains, this is where some of the story takes place.

Once upon a war 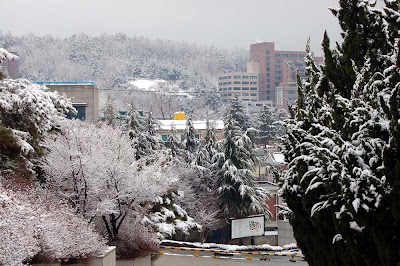 “When the cold, biting wind howls down from the mountains, I can almost hear their screams and cries riding upon that cold wind.”

When I’ve walk across the frozen Woosong campus here in Daejeon, South Korea (approximately two hours south of Seoul) on my way to school the past few weeks—when it has been so bitterly cold here—and have seen the snow-capped and pine-dotted mountains in the distance, I think about the war, which was fought north of here sixty-one years ago. I think about the men who had to traverse some of those mountains, trying to keep warm and dry during one of the coldest winters on the Korean peninsula. I think about the American blood spilled on the snow-covered ground of Korea, the same way that blood was spilled at Valley Forge and Bastogne. I think about the young men who died here far away from home and loved ones, who would never know warmth again.

And when the cold, biting wind howls down from the mountains, I can almost hear their screams and cries riding upon that cold wind.

Sixty-one years ago, as January came to a close; the Korean War still could have been lost for South Korea and the UN forces, which had come to Korea’s aid. Since November 1950, when the Chinese entered the war, the conflict had become, according to General MacArthur, “an entirely different war.” Those Chinese forces, an unstoppable juggernaut since Kunu-ri and Chosin, had pushed UN forces south of Seoul during the New Year’s Offensive. Poised to strike again around Wonju—a key transportation hub—men of the US Second Infantry Division, as well as French, Netherlands and other UN Forces, were about to turn the tide of the war at the Twin Tunnels and Chipyong-ni. It would not come easy and without cost, especially the casualties, which would befall the Second Infantry Division at Hoengsong February 12-13, 1951.

These were not the names of faraway places, which would become the vernacular of a nation remembering gallant stands and battles. For the generals sending men into harms way, these were names—marked by tiny flags and grease lines on crinkled, yellowed maps. For the hundreds of men who would lose their lives in “Massacre Valley” alone, they would be a cold, scribbled number written under KIA or MIA.

This is what I think about every day, when I see those cold, dark mountains shivering in the distance and the men who could have come from towns like LaSalle, Illinois; Vassar, Michigan; Waterbury Connecticut; San Antonio, Texas; St. Louis, Missouri; Charlotte, North Carolina; Indianapolis, Indiana; Cleveland, Ohio; Wheeling, West Virginia—who found themselves on those hills and mountains, in those frozen paddies and valleys of that so-called “forgotten war.”

This is why I wrote War Remains. 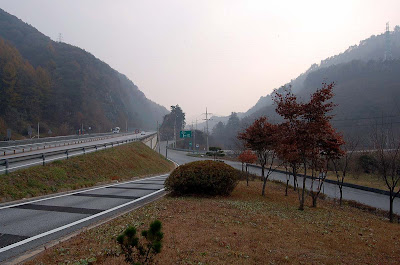 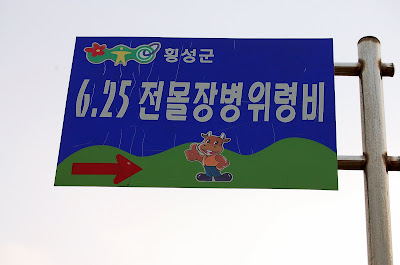 Finding the US Second Infantry Division Memorial in “Massacre Valley” near Hoengsong is not too difficult.

First, the monument is visible from the highway; however, if you have trouble finding it, all you have to do is either look for this sign or show this photo to one of the locals to help you get to it.

It is interesting that in Korea, the Korean War is referred to as the “6.25” war.

Hoengsong County is famous for beef. 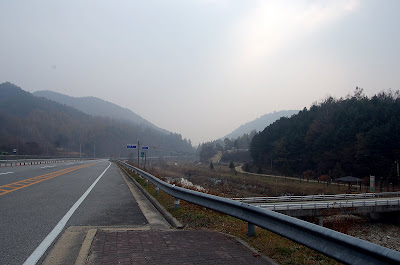 Leaving Changbong-ni (where the beginning of War Remains takes place), this is the main highway leading to Massacre Valley in the south and beyond that, Hoengsong. 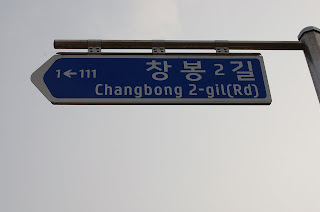 One of the crucial scenes in my novel takes place at Changbong-ni, which is located north of “Massacre Valley” and Hoengsong. It was here on February 11, 1951 where elements of the 38th Infantry Regiment, Second Infantry Division comprising a task force (Task Force 21) were attacked by the Chinese. 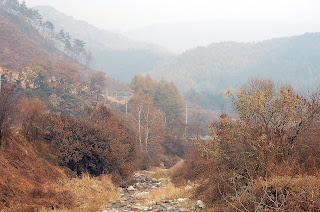 I thought the area would be more developed but aside from a few modern buildings and the highway, the area was not populated. In the distance is Oum-san, the mountain that Bobby describes in the novel. 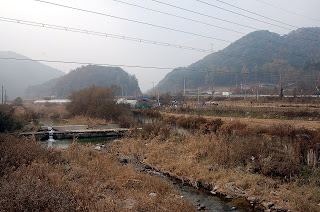 This is the valley where the prologue in my novel takes place.

Today I was honored with the comments left by the son of a Korean War veteran who discovered my post about the US Second Infantry Division monument at Hoengsong and the battle that was fought there in February 1951.

His father served with the 38th Infantry Regiment and fought in the battle that I described in my novel.

He wanted to know the exact location of the monument because he is planning to visit Korea on the 60th anniversary of some of the battles his father fought in during the war.

I am honored because that was one of my original intentions all along, when I first started writing War Remains, was that I wanted to honor all Korean War veterans and their loved ones and especially, those who served with the US Second Infantry Division and the 38th Infantry Regiment. 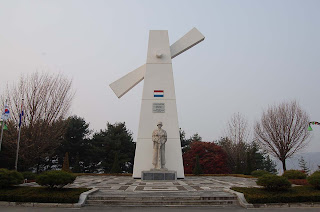 Located in Hoengsong, South Korea is the Netherlands’ UN Participation Monument to commemorate the contributions of Netherlands during the Korean War. The Netherlands battalion played a key role in the defense of Hoengsong in February 1951 which allowed elements of the US Second Infantry Division and ROK units to withdraw to safety after having gotten through “Massacre Valley.” 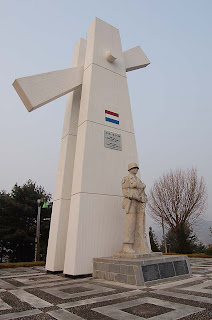 During the Korean War 120 men from the Netherlands lost their lives including the commander of the battalion at Hoengsong. 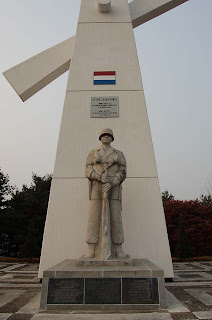 This monument, and others like it in South Korea were the brain child of Lee Kap-chong who wanted to do something to remember the countries who came to South Korea’s aid during the Korean War. 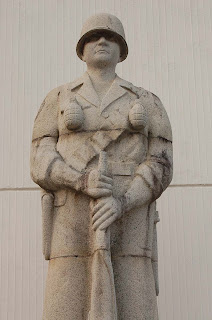 Each of the monuments, which are located in and around the areas where military units from these countries fought, has a unique design to symbolize both the country and the war effort. 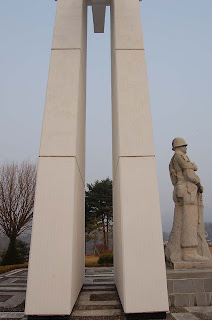 In War Remains, there is a mention of this battalion which defended Hoengsong and allowed the 38th Infantry Regiment to withdraw to safety.

A war was once fought here

Earlier this month, I went to Hoengsong north of Wonju to visit “Massacre Valley” a Korean War battlefield that was the sight of a major battle from February 11-13, 1951 and one that figured prominently in my novel. 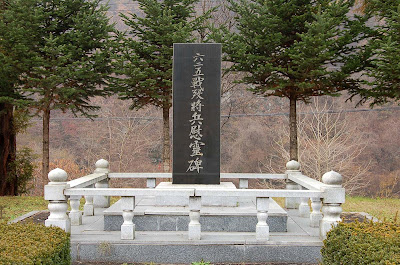 This a monument/memorial dedicated to the US Second Infantry Division 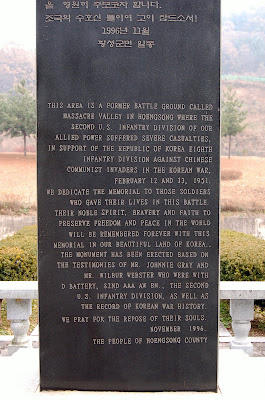 The inscription on the back of the monument/memorial