I first learned about Hoengsong and “Massacre Valley” when I read Stanley Sandler’s Korean War history, No Victors, No Vanquished in 2000, but it wasn’t until May 2001, when I had the chance to sit down with Oscar Cortez, when I learned more about “Massacre Valley” and what happened to elements of the 2nd Infantry Division.

When I started to write my Korean War novel War Remains in the fall of 2009, I remembered that interview I had with Oscar on our way to another Korean War battlefield, Chipyong-ni when he described the battle he was in north of Hoengseong in February 1951. That’s when I knew how my novel would begin and end and one of the battles which would figure prominently in the book. I wanted readers to know about this battle and to remember the men who lost their lives there.

r view of the valley and the monument which was dedicated to the United States Second Infantry Division (which is still stationed in South Korea). That’s another irony of this so-called “forgotten war.” One of the divisions which fought in the war, is still here and ready to fight.

And let’s not forget that there are still over 7,900 American service members from that war still listed as MIAs.

Of course, for the family members still waiting for their loved ones to come from that war, it has never been a forgotten war for them.

Three of my Facebook friends and their families are waiting for their loved ones to come home. One of those friends lost an uncle in this very same battle.

It’s been almost four years since I published this novel about the Korean War. I am proud of it and the lives it has touched. 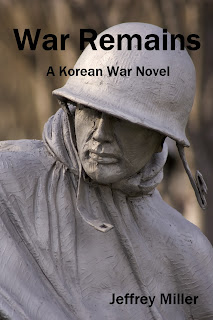 Next week I am scheduled to take part in this Internet radio program, Positively Pittsburgh Live to talk about War Remains with other MWSA (Military Writers Society of America) Korean War Book Award nominees.
It’s an hour-long show and I am looking forward to the chance to talk about my novel. It’s an honor to be nominated the first year this award is being offered.
I am supposed to come up with some “talking points.” Not really sure what kind of “talking points” I could come up with other than, how I’ve discovered this so-called “forgotten war” with the writing that I have done. To be sure, how I learned about the Korean War is not that much different than what Michael learns about the war as he tries to find out what happened to his grandfather, Bobby.
And it all goes back to February 2000, when I was standing in the Kyobo Centre in Seoul with that copy of Retrieving Bones in my hand. If it hadn’t been for that book, I probably would have never written about the Korean War commemorations from 2000-2003. Who knows, right? And if I had never covered any of those commemorative events, I would have never learned as much as I would about the war, and meet Korean War veterans like Raymond Davis, Philip Day (Task Force Smith) Ed Fernandez, Lou Jurado, and Oscar Cortez.


I guess I have some talking points after all.

This book is dedicated to….

I knew from the beginning, when I sat down and started writing War Remains that I would dedicate the book to my mother, my eighth grade English teacher, Arlene Gandolfi and Oscar Cortez.

My mother was proud of me when I started writing for the Korea Times in 2000 and went around LaSalle-Peru showing everyone the clippings from the newspapers I had sent her with my articles in them. She was always after me to write a book but I never knew what to write about and kept on telling her, one day mom, one day.

Mrs. Gandolfi first encouraged me to write when I was in the eighth grade at Washington Grade School 1971-1972. It all started with his science fiction story we read in class and some extra credit for writing a short story. I started writing a serialized story about invaders from Mars that Mrs. Gandolfi read in class. I included all my classmates battling Martians and saving Oglesby, Illinois from destruction. Very early on in life, I understood the meaning of, “the pen is mightier than the sword.” Of course, my classmates were not too thrilled when Mrs. Gandolfi gave quizzes on my story; they felt I had an unfair advantage as the author.

Interestingly, Norman Mailer’s first story, written when he was in elementary school, was also about an invasion from Mars.

I first met Oscar Cortez in 2001 when he visited Korea with a group of Korean War veterans from San Antonio. His story about his military service in the Korean War, was one of the inspirations for War Remains. His story could have been the story of any man who was thrust into extraordinary circumstances during the war.

The book is also dedicated to all Korean War veterans and their families, as well as those families who lost a loved one during the war, or who are still waiting for a loved one to come home.

And finally, I dedicated the book to the men and women of the US Second Infantry Division who to this day, still help to keep peace on the Korean peninsula.

It all started with a book

The day I held Retrieving Bones—a collection of short stories and poetry written by Korean War veterans—at the Kyobo Book Centre in downtown Seoul one cold February afternoon in 2000, was the day I started writing War Remains.

As I stood there in Kyobo, debating whether or not I should pay the 39,000 Won for the book, I convinced myself that if I bought the book, I could maybe write a book review for the Korea Times; after all, this was 2000 and the 50th Anniversary of the start of the Korean War. Maybe, the editor would go for the idea. He did and asked me if I could write more book reviews. I said I could. And that is what got me started down the road as a feature writer for the newspaper and covering many Korean War commemorative activities in Korea from 2000-2003.

It’s true, I was an accidental journalist, but for the first time since college, I was writing almost on a daily basis and at the same time becoming a part of history while learning about history and above all, discovering a forgotten war.

In May 2001, I had the opportunity to meet some Korean War veterans from San Antonio who came to Korea to commemorate Chipyong-ni, an important battle of the Korean War in February 1951, which turned the tide of the war for the US Second Infantry Division (2ID). Most of the veterans had served in the 2ID, including Oscar Cortez who was captured by the Chinese on February 12, 1951 north of Hoengsong—east of Chipyong-ni.

When I sat down a little over a year ago to begin writing War Remains, I had in mind that battle. Although the battle itself would not be featured prominently in the novel, it was part of the inspiration.

It’s a good thing I bought that book that day. It changed my life forever.