In the spirit of Charles Dickens and Leo Tolstoy, Pachinko is a beautifully written story about the sweeping four-generation history and saga of a Korean family in Japan. In a story filled with forbidden love, triumph and failure, and the need to belong, author Min Jin Lee sheds light on a subject not normally explored by novelists—the plight of Korean immigrants in Japan. In rich, evocative language, Lee takes the reader on an emotional, amazing journey through the Japanese occupation of Korea, post World War II, the Korean War, and modern Korean society.

At the center of this moving story is the heroine Sunja, the family matriarch who will stop at nothing to ensure the survival of her family. She is the embodiment of the struggles that many Koreans faced during this period who found themselves exiled from their homeland and the yearning to return to it one day. The depth and empathy of her story, as well as other members of her family, is just as haunting as it is moving.

Pachinko is a literary triumph; a readable, passionate story that will resonate with readers long after they have finished it

It was twenty years ago today…

Not when Sergeant Pepper told the band to play but when this former Sergeant got on a plane at LAX and flew to Japan.

And so began this 20-year adventure of teaching English in Asia—first in Japan and then in Korea. It’s been some adventure that’s for sure.

I’ve already written much about my life in Korea all these years, but that cool, rainy day in June when I arrived in Japan still stands out in my mind a lot. There are some things that a person just never forgets and the day I arrived in Japan is one of them. I had no idea what to do when I arrived and what I had to do to get from Narita and Tokyo to Hamamatsu, but when you are so pumped up with adrenalin to have just flown halfway around the world, everything just fell in place—from getting to Tokyo Station and getting on a Shinkansen to Hamamatsu.

I’ve never forgotten what it was like coming into Tokyo on an elevated highway with all these neon signs materializing out of the mist that made me think of one of my favorite sci-fi films, Blade Runner. I guess if you are going to compare Tokyo in the rain to anything, you can’t go wrong with comparing it to that sci-fi flick.

Like I said, everything pretty much fell into place from the time I arrived in Tokyo, got to Tokyo Station and boarded the Shinkansen (on a busy Friday evening) to Hamamatsu. The adventure had started and my life would be changed forever.

The Great Buddha at Kamakura

The Great Buddha at Kamakura

You sit there so quiet

with that peaceful look

upon your bronze face

of pink and white cherry blossoms

to the vibrant red and golden

for the faithful who seek

Not even a tidal wave

Halfway around the world in Asia, the celebration of Christmas is quite different than the way it is celebrated in the West. Although the true meaning and spirit of the season might be lost in the obvious commercialization and marketing of the holiday in countries like Japan and Korea, certain traditions and celebrations have evolved that at least capture the essence of the holiday.

In Asia, there’s really no true meaning behind celebrating the holiday unless you happen to be a Christian. To be sure, having lived in Asia for the past 18 years, I have seen the holiday go from being just a special day to enjoy a “Christmas Cake” in Japan or exchange greeting cards in Korea to having the same overblown commercialism in cities like Bangkok, Seoul, and Tokyo, the same kind of rampant commercialization that I have seen back in the States.

In predominantly Buddhist Asia, the holiday for the most part has always been about the cultural overtones and not the holiday’s religious background. While more and more Christians in Asia are celebrating the holiday as the birth of Christ, the holiday has evolved rather quickly into a cultural and commercial juggernaut. Cities like Bangkok roll out the Christmas trees and decorations just in time for the onslaught of Western tourists who would rather frolic on the beaches of Koh Samui and suck down Singha Beer than fight shoppers in crowded stores back in Europe.

Yes, everywhere it is Christmas and you don’t have to be a Christian to enjoy the holiday. Of course there is more emphasis on “Season’s Greetings” instead of “Merry Christmas.”

I’ve spent a few Christmases in Thailand and I had no trouble getting into the holiday spirit whether it was finding Christmas trees or cards. And just last year when I was in Vientiane, Laos there were Christmas trees and decorations everywhere—of course to make all us Western tourists spending the holidays in Indochina to feel at home.

When I was living and working in Japan back in 1989 and Christmas rolled around most people gave a Christmas cake for the holiday though everyone had to work. However, you could find Christmas trees and all kinds of decorations. I went to Tokyo Disneyland two weeks before Christmas and the entire theme park was decked out in holiday cheer. You would almost expect that from Mickey Mouse and friends given the mammoth cultural and commercial enterprise that Disney is in countries like Japan—you know, “Deck the halls with boughs of holly” and lots and lots of Mickey Mouse.

The same was true, to a lesser degree the following Christmas when I now was living and working in Seoul (and where I have been since). Back then, in 1990, the holiday seemed to centered on the giving of Christmas cards, some rather nice and traditional; other’s a little cheesy and a commercial mockery of the holiday like the ones I saw of grotesque cartoon interpretations of Santa Claus.

Over the years though, the holiday has evolved into the commercial juggernaut fed by rampant consumerism and a holiday cheer. You definitely see more Christmas Trees and decorations than you did when I first arrived here, kids talk about Santa Claus, and at Starbucks, you can buy a special yuletide brew. A Korean family, one who I have been good friends with for about as long as I have been in Korea and who are devout Buddhists put up their Christmas tree last weekend.

Much of the holiday’s religious stronghold in Korea started with the Christian missionaries in the 1800’s and since then has grown significantly so the holiday in Korea is not without a religious precedent. At least this legitimizes the holiday amid the full-blown commercialization of the holiday that has evolved over the years.

So what is Christmas really like in Asia? It is, for the most part if you are a non-Christian, a cultural celebration, no more and no less and all dependent upon just how commercialized one wants their holiday cheer.

Hanging out with Kenny Shangrila in Japan: Kenny and Johnny Thunders’ guitar 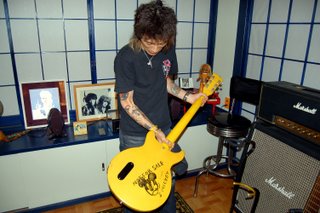 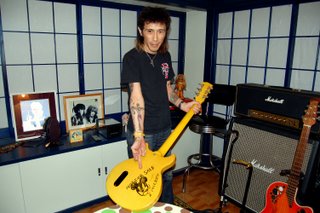 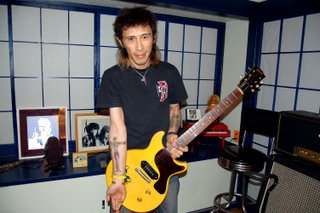 One of Kenny’s prized possessions (and there are many!) in his country studio is a Gibson guitar that he once lent to Johnny Thunders to use when he was playing a concert in Japan.

Kenny first met Johnny Thunders in 1985 when Thunders was in Japan for a concert. According to Kenny, one of his friends had invited him to the concert (his friend worked at the venue where Thunders was playing) and when he had the chance to go backstage, he was introduced to Thunders. They became good friends and every time Thunders was in Japan, he looked up Kenny.

Besides the Gibson guitar that Thunders once used, Kenny has a lot of photos of Thunders juxtaposed with other photos and posters on the walls of his studio. He even has a sort of small memorial shrine for Thunders (with a photo of Thunders tombstone) which is one of the first things you notice when you enter the country studio.

Sometimes when Kenny talks about Johnny, you can detect a hint of sadness in his voice of having lost a special friend.

And now I am connected to Johnny Thunders.

When I arrived at Narita the other day it was a little cold, so Kenny had brought a coat along for me to wear and told me that he wanted to give it to me as a gift. It was a vintage coat, the kind that I probably would have worn when I was back in college.

Turns out that Kenny had once lent this same coat to Thunders to wear. Thunders was in Japan for a concert and wanted to go to Ropponggi with Kenny, but it was a little cold. So Kenny lent him the coat to wear for the day.

And now I have that same coat. Thanks Kenny. I am going to treasure it.

Then there’s the “turtle” that Kenny gave me made out of Japanese “go” (five) yen coins.

“I want to give you a special gift,” Kenny said the day he brought me to his country studio.

Turns out that one time when Johnny Thunders was in Japan visiting Kenny he had seen the turtle and wanted one of the “go” yen coins for a souvenir. So, Thunders pulled off one of the coins from the tail and made a necklace out of it. If you go to Jimmy Wong’s shop in Bangkok you will see a photo of Thunders with that “go” yen coin on a string around his neck.

So I have a turtle made of “go” yen coins minus the tail because Johnny Thunders wanted one of the coins for good luck.